“Do not go overboard with tattoos”

Tattoos are an awesome form of body art and self-expression, both for men and women. This is also something that will attract a lot of women, since many slags will be very intrigued by a man who expresses himself by getting a lot of work done like tattoos. However, there are certain kinds of tattoos that may sound fun at the time, but are less good for attracting women, especially after you’ve already gotten them home. We’ve found that some of the women we’ve met have been very turned off by the following tattoos.

Just like saying the wrong name in bed, no girl wants to see the name of another girl splashed across your skin. Even if you’d been married for 20 years and you’re only planning on spending one night with this woman, for women it’s all about the fantasy. They aren’t fantasizing about being someone’s second choice, so don’t make her feel like that’s what she is.

A Face Staring At Her

Studies published by the American Journal of Psychology have found that both men and women are more likely to feel compelled to honesty when they see a face, or eyes in particular, looking at them. Is that really how you want a woman to feel when she’s straddling you? Make sure she’s not going to feel all that freaked out when you take off your shirt, if you’re worried about her wanting to bolt.

Something Cuddly Being Murdered 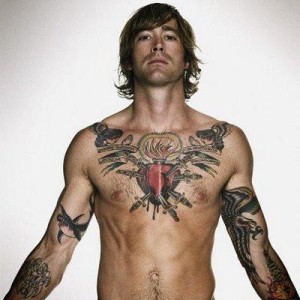 “Tattoo showing knifes piercing a heart is not a good idea”

Girls like cuddly things. Many blokes have gone through the phase of thinking that the subversion, of something cute and sweet being mauled by a monster or something, is hilarious. We’ve seen countless tattoos of teddy bears and puppies being mangled, and we can tell you right away: women are not into those tattoos one bit. It’s best to stick to something (just about anything) else if you want to keep having sex with random women. If you want to impress one particular bird you know would find it hilarious, go ahead—but be aware that she’s likely the only one who will find it funny.

There are plenty of women who love playing video games just as much as men do. However, you can’t trust that some random bird you find on a site for meeting slags is going to find your Super Mario ink as charming as you find it. You’re trying to pull off being a mature and intelligent adult, and most women are going to see that kind of thing as being quite childish and immature.

Women are not, by and large, aroused by the site of other naked women the same way that men are. This should not be a surprise. One of the things they dislike so much about seeing a tattoo of naked women on a man’s body is the fact that they may feel like they don’t physically compare to the woman in ink, which can make her feel very insecure about her own body.

Sexual Positions That Are Less Fun Than You’d Think